skip to main | skip to sidebar

News.. I am featured in Zupi magazine! :) The editor just send me some pictures of it .. It's featuring some of the best artists out there right now! 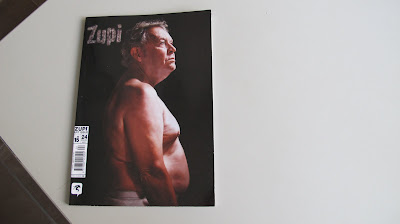 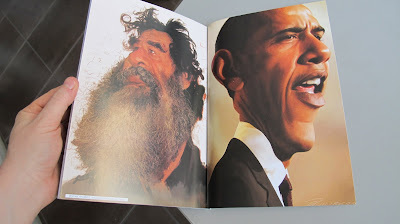 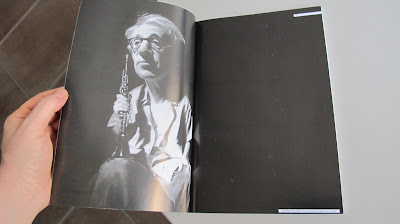 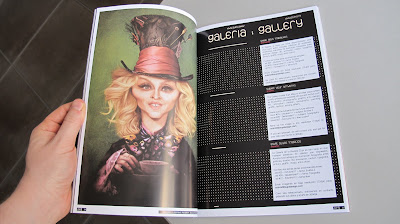 Plus a little sketch painting that I did tonight! 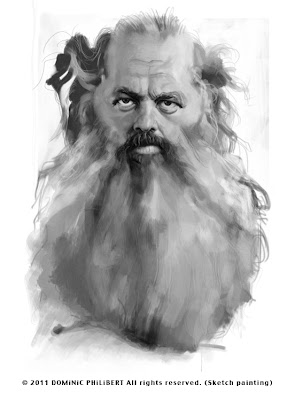 Painting done this week in the memory of Zolag! RiP 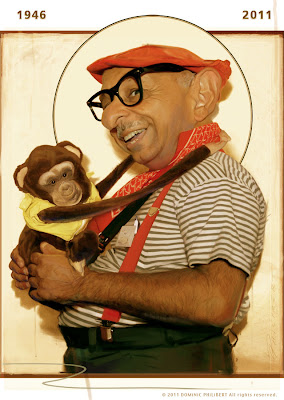 Finally . . Here's the final painting that I have been working on during this last week. This one has something very special for me. I did it in memory of a caricature artist who left us a few months ago. * (This will be displayed in an event that is taking place right now ).
There's a little story behind it and there's a reason why I really wanted to do this tribute.

A few years back, I was participating in an exhibition in Montreal and I've presented 2 special pieces for that event. One of them was a portrait of an old Quebec humorist artist named Sol. (You might already have seen this painting on my blog . . the illustration is called "Sol-à-lui-même" and has been painted digitally). Click here to check it out. I did put a lot of effort, work and time on this particular illustration to get it right and to get that real result. (BTW.. This piece earned a public's choice award at the end of the show).

So during the week before the opening.. I got a short email from a guy saying "Philibert cheater?". Haha! It felt really weird. :) I never liked when people are assuming things that don't really know about. I am really hard working and dedicated to my art everyday since I am young. Attacking it is kind of attacking me personally. If you know me well then you won't have say such lies. I have been painting realistic portraits for years before using the computer. I don't need any machine to do it.. and still some people think that my real paintings are done with photoshop? :)

The guy behind this rumour was named Zolag. I never heard about him before. So when I came for the opening show.. I made an obligation to go talk to him and see who he was and what this was all about. On a one on one discussion .. you can't misinterpret things your way. I finally found him not to far from my work .. So I presented myself and we had a long chat together. He told me everything about what he said and his taught and didn't try to escape and avoid me. I have respect for people who can assume what they think when they are in front of you. Finally his point was that he didn't think that someone could draw and paint like that on a computer. Unfortunately, he had no other choice to realized that I could do it because I had another portrait displayed there as well done with charcoal.

From this discussion I have learned that working digitally will always make people suspicious about your art skills and that you might have use an image and distorted it. And .. even ... if you did a stick figure some people will still think that way! loll Being able to draw traditionally will always save you. I realized that I should continue to experiment, push and don't really care about opinions because you won't be able to develop further if you try to please everyone and do what they expect.. Satisfy yourself first. For the rest you can't control it. There's no rules out there.. There's new possibilities offered to us with the computer now and I don't see the point of only trying to imitate an oil, acrylic or watercolour painting on a screen surface. It will never be a real painting anyway. Computer is a tool for exploration! Use it as much as you can to develop! Just be true to yourself with whatever technique you will use. Just create images and have FUN!


Zolag: I had the chance to meet a funny unique original marginal man. A great entertainer. You had a special vibe and contagious smile and laugh. In your eyes I saw everything that I needed to see from you to understand that you were a great person and that your goal wasn't to hurt me. I hope you are somewhere entertaining other people like you did for me during this moment.You have been on my path for a certain reason and I will remember it. Between you and me .. Now you know that I can paint. I did it for you this week with all my heart in this painting. Rest in Peace.

These are the 2 paintings that I did for today's event. 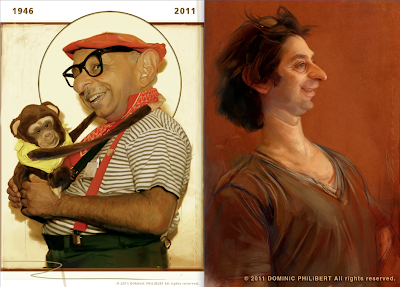 Tease from the painting I am working on right now.. It took me the whole week to do it. I am almost done ..I will post the whole thing tomorrow!

This is done for an exhibition coming up this week-end.
Posted by Dominic Philibert at 10:31 PM 3 comments:

100 000 visitors came to my blog since I have started it! Thank you all so much for your support! :) 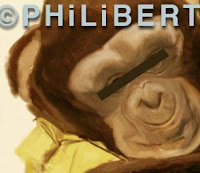 And a sketch painting close-up of Gaddafi! 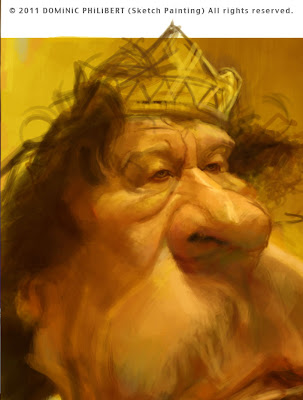 A self-portrait study that I did a couple weeks ago! 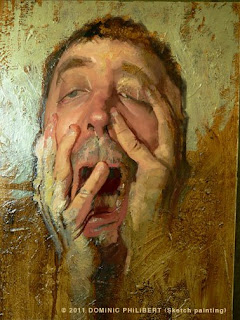 A clown commissioned me to do a specific portrait of him.. so here's the result! He was so happy with the result. .:) 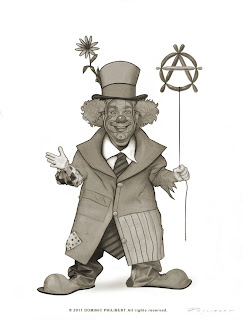 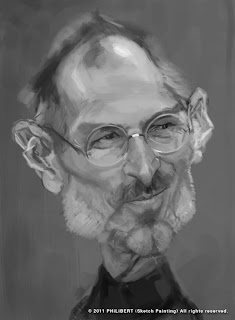 Promote Your Page Too

BECOME FAN with me on FACEBOOK by clicking here